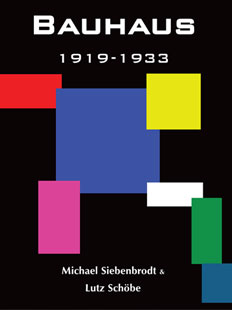 The Bauhaus movement (meaning the “house of building”) developed in three German cities - it began in Weimar between 1919 and 1925, then continued in Dessau, from 1925 to 1932, and finally ended in 1932-1933 in Berlin. Three leaders presided over the growth of the movement: Walter Gropius, from 1919 to 1928, Hannes Meyer, from 1928 to 1930, and Ludwig Mies van der Rohe, from 1930 to 1933. Founded by Gropius in the rather conservative city of Weimar, the new capital of Germany, which had just been defeated by the other European nations in the First World War, the movement became a flamboyant response to this humiliation. Combining new styles in architecture, design, and painting, the Bauhaus aspired to be an expression of a generational utopia, striving to free artists facing a society that remained conservative in spite of the revolutionary efforts of the post-war period.
Using the most modern materials, the Bauhaus was born out of the precepts of William Morris and the Arts and Crafts movement, introducing new forms, inspired by the most ordinary of objects, into everyday life. The shuttering of the center in Berlin by the Nazis in 1933 did not put an end to the movement, since many of its members chose the path of exile and established themselves in the United States. Although they all went in different directions artistically, their work shared the same origin. The most influential among the Bauhaus artists were Anni Albers, Josef Albers, Marianne Brandt, Marcel Breuer, Lyonel Feininger, Ludwig Hilberseimer, Paul Klee, Wassily Kandisky, and Lothar Schreyer. Through a series of beautiful reproductions, this work provides an overview of the Bauhaus era, including the history, influence, and major figures of this revolutionary movement, which turned everyday life into art.


About the authors:
Michael Siebenbrodt and Lutz Schöbe are two German academics who have been conducting research on the Bauhaus since the mid-seventies, achieving a high level of recognition in their field. Through their organization of the Bauhaus collections in Weimar and Dessau in addition to numerous exhibitions and publications treating the Bauhaus, they have become internationally renown.